My name is Chris, and I collect traffic lights.

Unless someone else is a collector of something normal, it can be a little difficult to admit that you collect something as odd as traffic lights. Some people look at you like you wear polka dots every day. But I’ve recently learned that admitting that can open some pretty cool possibilities.

In the 1950s, Stadco made a little traffic light that you’d hang int he back of your car. The green would come on when you had your foot on the gas, yellow would illuminate if you were coasting, and red would come on when you hit the brakes. I have one. It’s a neat little piece. But I’m looking to sell it because I recently found one on Craigslist that included the original box and instruction sheet. Very cool. But there’s more to this than just a little traffic light. 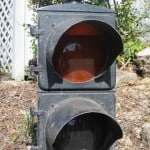 The guy who listed it lives about 5 hours north of me, so when I emailed him asking whether or not he’d consider shipping if I paid for shipping costs, I mentioned that I collect traffic lights. I told him that wanted to add this to my collection because it also had the box. I felt like I needed to legitimize myself because you never know what kind of yahoos are trying to scam others out of their belongings so I wanted to add some personality to the email. Well, he was happy to oblige, but also mentioned that since I had an interest in traffic lights, I might be interested in an old pedestrian Wait-Walk signal that he had. After seeing the photos and hearing his asking price, I couldn’t turn it down.

A friend who lives in Boston makes occasional trips to New Jersey and was kind enough to pick up my new booty and meet me on his next trip to the Garden State.  I have a new piece of history in my collection, just because I admitted my odd-ball hobby. 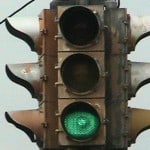 The only traffic light on my site that I don’t own.Blog 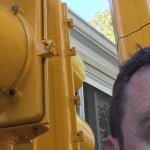