Every week for a couple of months in 2004, I drove back and forth from my home in northern New Jersey to Buffalo, New York. There was a particular section of 690 at which traffic would have to cross the highway certain times of the year when festivities were happening at the fairgrounds on the southern side of the highway. To help with traffic control, temporary signals were used. Span wires were used with disconnects in place, allowing the easy hook-up and take-down of traffic lights whenever they were needed. Below are two photos I took during my travels.

[ezcol_1half] I’m curious as to when the signals were hung. I’m guessing it was done at a time when closing down a lane or two of traffic wasn’t going to cause any major delays. But I have to say, I wouldn’t mind watching the process of setting them up or taking them down.[/ezcol_1half] [ezcol_1quarter]

Temporary lights on a span wire

[/ezcol_1quarter_end]The signals were controlled manually by a police officer in the median at a control box. Every time I drove through, they were either flashing yellow, or simply not there.

While writing this post, I figured that I would check Google Maps to see what it looked like now. They’re still there! 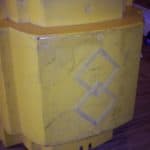 A checkered past for Checker Signals.Blog 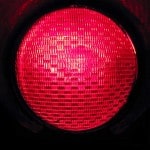 You have a traffic light. Now how do you make it work?Blog