A traffic light restoration is better late than never.

In May of 2015, I bought a traffic light from a gentleman (Ed) at his garage sale. (Read my previous post about that) It wasn’t much to look at. The light was nothing but a sand blasted shell with a cardboard box of loose lenses. He said that if I was going to restore it, he’d like to see it once it was done. 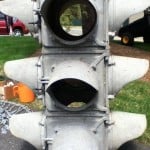 The Horni the weekend I bought it.

Restoration began when I scrubbed the oxidation off of the aluminum body. I new it would be difficult or impossible to remove much of the hardware without damage, so I opted to just tape them off with painter’s tape. I sprayed the body with an aluminum primer, then gave it a nice coat of Hunt Club Green paint. The reflector doors had been broken off at some point. Without these, there was nothing to hold the reflectors in place and there was no source of illumination. So, I sourced used Dialight LED inserts, which have the look of old lenses. I then had a custom controller built to be able to cycle the signal through one of 16 different sequences. Back in 1929, there were no standards as to how traffic lights functioned, so I researched as many sequences as I could find to include in the programming. It’s really cool to see it working.

But there is a back story to all of this. Ed wasn’t simply interested in seeing what it would look like when it was done.

Ed’s father retired from being a police officer in 1984 and asked the Union County road department if he could have the old signal that had been sitting in the county garage for many years. Shortly after that, he had it sand blasted with plans of giving it some sort of restoration and hanging it in the back of his riverfront home in Florida. As life often gets in the way, he never got around to doing anything further with it and eventually gave it to Ed. Ed had plans of restoring it for his father, but again, life got in the way and little more than scraping off some of the oxidation had been done to it.

A few years later, Ed’s father passed away and the unfinished signal sat in a shed for roughly the next 25 years. 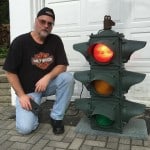 Ed next to the signal I bought from him in very different shape.

On a warm day in July, a bit over a year after I bought it from Ed, I was happy to show him what I was able to do with the signal.

Cupping his hand over his mouth, his eyes wide, and murmuring a low-key, “Wow”, he was visibly moved upon seeing the signal. We talked for about a half an hour. He told me about his father, himself, and of how he likely painted this signal when he worked for the road department, one of his first jobs. He thanked me for remembering to show him the finished project. I took a couple of photos of him next to the light so he could print one up and put it next to a photo he has of his dad. He wished that his dad could see what had become of this odd “retirement gift”, and maybe the photo would help facilitate that in some way.

I hope he likes what I did with it. 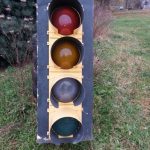 Why is there a clear light in the traffic signal?Blog 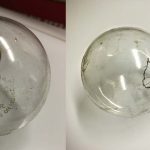 How to choose the right light bulbs for your traffic light.Blog